Back to Amazon Tours

Pousada Pira Açu (7°46’20.82″S, 60°23’30.73″W) is located on the right bank of the Aripuanã river about two hours by boat upstream from its confluence with the Roosevelt river. The lodge is situated within the Madeira – Tapajós centre of endemism, a region of noteworthy biodiversity with much still to be discovered. The lodge is surrounded by impressive Amazonian rainforest in all directions; satellite images show there is no significant deforestation within a radius of 35 kilometres from the lodge. The lodge is located in a Reserva de Desenvolvimento Sustentável (Sustainable Development Reserve), part of a mosaic of protected areas stretching across the southern Amazon from the state of Pará west across the southern reaches of the state of Amazonas. 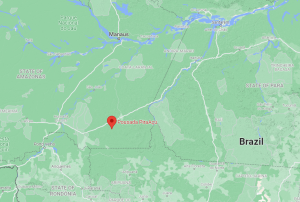 The lodge is strategically located for its principal focus, which is catch-and-release sport fishing. Aside from being situated on the right bank of the Aripuanã, one of the largest rivers in the Madeira-Tapajós interfluvium, from PiraAçu we have access to three other rivers, each with a different character and range of micro-habitats. Twenty minutes upstream from the lodge is the Paxiúba river, a relatively narrow left bank tributary of the Aripuanã with several small oxbows and associated seasonally flooded areas, along with mixed terra firme forest with patches of slender bamboos. Roughly 50 minutes downstream from the lodge we reach the Guariba river, a fairly wide left bank tributary of the Aripuanã flanked by tall forest on a wide floodplain, with a variety of seasonally flooded and transitional forests rich in vine tangles and patches of slender bamboos. The most secluded of the four rivers is the Buiuçu, a right bank tributary of the Aripuanã which can be reached either by a 25-30 minute boat ride downstream from the lodge, or by a two kilometre trail leading from the far end of the landing strip down to the river. This latter trail is just wide enough for the lodge’s all-terrain vehicle and customized passenger wagon to travel almost all the way to the Buiuçu (for boat trips on the river), but the track is an excellent birding trail through flat upland terra firme, well worth one or more birding visits. The Buiuçu itself is flanked by hilly terra firme forest along its lower course, with the terrain flattening out a bit farther upstream where we reach the river from the lodge.

How to get there

The easiest way to reach the lodge is by air in a chartered plane from Porto Velho. The trip takes one hour and forty minutes in a Cessna Caravan or similar aircraft. It is also possible to reach the lodge by land and river, driving from Porto Velho to Humaitá, where one crosses the Madeira river on a ferry before continuing along the Transamazônica highway for another 300 kilometres to Aripuanã river and the small village of Vila do Carmo (known to all locally as Mata Matá). From Mata Matá one boards the lodge’s boats and travels roughly two and a half hours upstream to Pousada PiraAçu. This trip makes for a long, tiring day, and it might be best to overnight in Humaitá or at Santo Antonio do Matupi (known by most as KM 180) to break up the trip. Around Humaitá there are plenty of birding options, including the várzea forest along the first five kilometres of the Transamazonica on the east bank of the Madeira, the native grasslands surrounding the town and between Humaitá and Porto Velho, and the excellent tall forests found between Humaitá and Lábrea. By overnighting at KM 180 (there are a couple of basic hotel options there, and a more modern-looking hotel was nearing completion in Sept. 2021), birders would be staying near the northern edge of the Campos Amazônicos National Park. This area would undoubtedly be good for white sand specialties such as Chico’s Tyrannulet and Aripuanã Antwren, while much deeper into the park itself cerrado birds such as Collared Crescentchest, Bearded Tachuri, and Rufous-sided Pygmy-Tyrant have all been recorded.

PiraAçu currently has nine cabins which all accommodate at least two guests, including two larger cabins that can be configured for up to four guests. The wooden cabins are rustic but functional, with hot water showers and a good air-conditioning unit, in addition to a screened-in front veranda. The lodge offers a complimentary daily laundry service to guests. The food at the lodge is excellent and plentiful, served buffet style.